The Whole Game of Football is present in the Rondos

Last season, Borussia Mönchengladbach beat Bayern Munich 3 – 1. Part of the victory can be explained by the high-pressing and man-to-man marking game Mönchengladbach sought for during almost the whole game, plus the fast attacks they looked for after recovery.

Here, I will analyze why Mönchengladbach´s high pressing game did work and why Bayern couldn´t beat it. 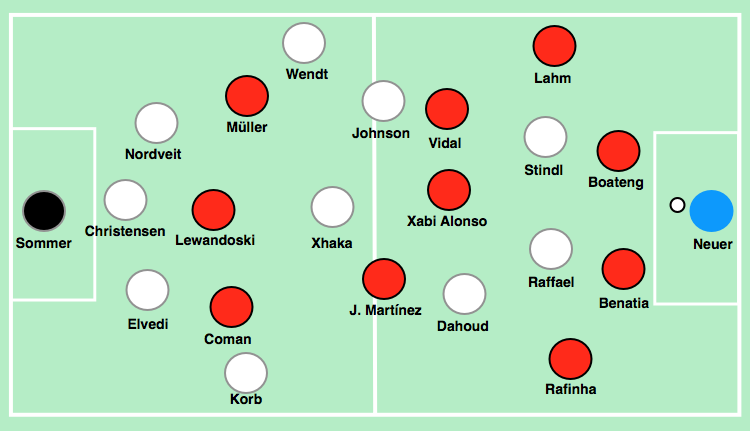 Borussia Mönchengladbach´s victory over Bayern could sound surprising for the average fan, but not for Guardiola. Before the game, Pep had called out that this would be the most difficult away game they would play in the whole 2015/2016 season.

Gladbach nipped Bayern´s possession game in the bud. To do so, they marked man-to-man in the whole pitch, forcing Bayern to play long balls.

Minute 2, first half. Gladbach shows exactly where they want to play the game.

Why the high pressing worked

There were two main reasons why this type of pressing worked very well this time:

Boateng and Xabi Alonso, who dominate the art of long ball play, normally received the ball with their backs to goal, making it impossible to be them who would make the long passes. Thus, it was normally Manuel Neuer who tried to break the pressure. Accuracy was severely diminished. 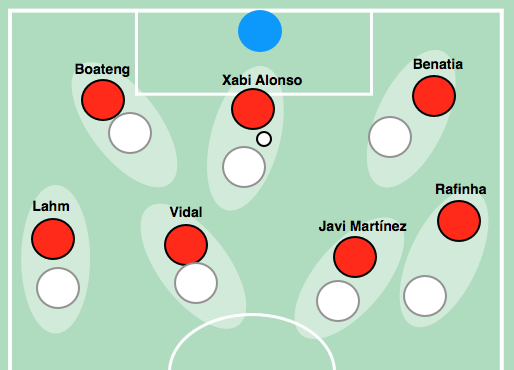 Bayern had a lot of difficulties in playing the ball from the back. Furthermore, they could not play long balls through their experts (Xabi Alonso and Boateng).

How could Gladbach have numerical superiority in defense even under man-to-man marking? As Bayern´s forwards for that game (except for Coman) were not so fast (as they Robben, Ribery or Costa are), the long passes was normally made to the front of defenders, not their backs. That allowed Xhaka to automatically cover fullbacks backs if the ball were won by Bayern´s forwards.

Once the long balls were made, Xhaka would cover fullbacks by placing himself in the defensive line and cover the central lane.

The Whole Game of Football is present in the Rondos

All posts by Julián Genoud
1