In his third and last season at Bayern Munich, Guardiola has introduced a few tactical innovations (although technically speaking, they should be considered evolutionary improvements), which led the Bavarian team to reach almost its full potential (although per recent events we must wait until the Champions League knockout rounds of March/April/May to draw conclusions). These changes are neither the only ones nor permanent, since Pep´s teams (and even Pep) are the most clear example of a moving organism in constant change.

The most impactful ones will be shown and explained in different posts.

Douglas Costa, the strength of the weak side

Douglas Costa´s arrival to Munich has brought a breath of fresh air to Guardiola. The Brazilian is a specialist int 1v1s. But that is not something new in Bavaria (as Robben and Ribbery do have this ability). Instead, his talent for constantly looking to finalize is what is remarkable.

Unlike Robben, Douglas Costa tries to finish everything he touches: Each single play ends in a cross, a shot or a corner kick. Furthermore, he can dribble on and to any side. Thomas Müller is thus the most benefited one here, as he captures everything that is being crossed by Costa (in first or second plays). In this sense, it can be said that Bayern has turned into a more German team when it comes to the final third, sacrificing possession towards more speed. 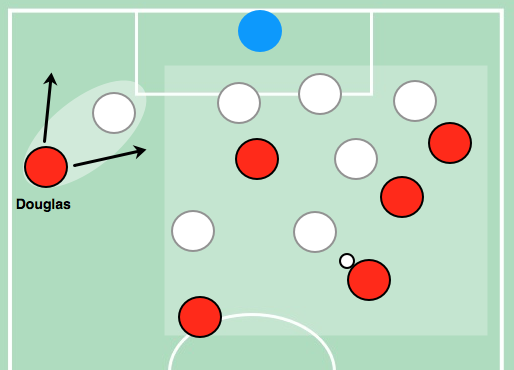 Bayern brings ball and players  to the strong side (shadowed square) to allow Douglas Costa to play 1v1 on the weak side.

Unlike Robben, Douglas Costa tries to finish everything he touches: Each single play ends in a cross, a shot or a corner kick.

Having said this, how can Bayern exploit Douglas Costa? How can they create the necessary conditions for him to dribble and finish? Overload to isolate. In this first semester of competition, the idea is to bring ball and many players to the strong side (sometimes the right side, sometimes the left) to allow Douglas Costa to play 1v1 on the weak side.

This already happened in past seasons, leveraging on Robben on the right. The difference, now, is that the finishes tend to be way more effective due to the good relationship between the Costa-Lewandoski-Müller trio, and due to the presence of so many players in the final third, which makes it possible to capture even not-so-good crosses.

Even though the distance between Boateng and Costa would not suggest so, they coordinate perfectly. Bayern groups opponents on one side to look for a long ball to Costa. 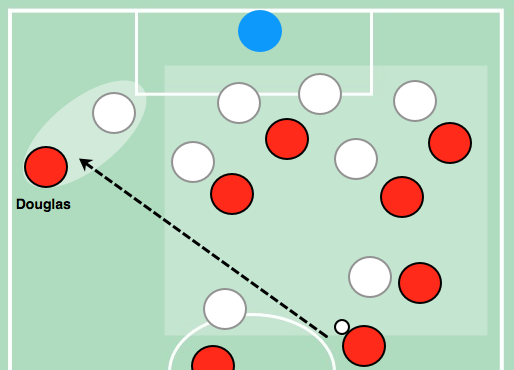 Normally, it´s Boateng who looks for Costa with a long ball, when it´s possible for him to play 1v1.

Bayern Munich disorganizes opponents by playing Juego de Posición, until they can find a pass between lines that allows to open up for wingers. Attack and finish.

Juego de Posición to group opponents in a specific area. Free up other areas to enable Costa the possibility to play 1v1.