Kranevitter, Positioning and Ball Control for a Clean Bulild-up – Rondos

Matías Kranevitter is one of the top appearances in the Argentine League in the past 10 years. In addition to his ability to stealing the ball and distributing it efficiently, he has shined in his understanding of the game (especially around positioning) and his orientation when receiving the ball, which allows him to make two movements in only one time. What follows is a video/visual analysis of his typical movements and the effect that those movements have in building up for River Plate.

Regardless of the formation, Marcelo Gallardo´s River Plate is based on three fundamentals: (1) Playing out from the back by generating numerical advantage; (2) Attacking by overlaps, combinative play and crossing; (3) Counter-pressing immediately after ball is lost.

The execution of principles (2) and (3) would be suboptimal in terms of the number of players in attacking positions if teams don´t build up from the back. To do so, River Plate executes the famous ´Lavolpian build-up´ (with Josep Guardiola as it greatest exponent), in which Matías Kranevitter plays a key role.

The initial distribution is often the following: centre-back defenders open up, the center midfielder (Kranevitter) goes back, side backs (normally Mercado and Vangioni) move forward to the midfield so that River Plate can play a 3v2 (or 4v2 if goalkeeper Barovero is considered) on the blue area. 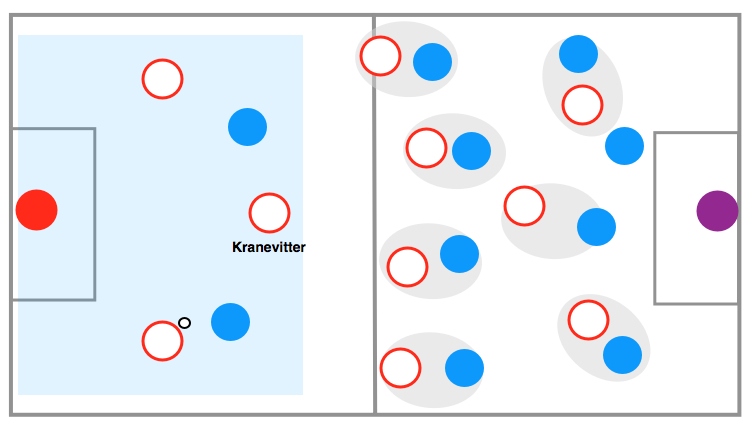 Initial distribution of River Plate players when playing out from the back. Side backs move forward to the midfield to create a 3v2 game (or 4v2, with goalkeeper) in the back.

Each of the three players from the back will try to run with the ball as much as they can, with the goal of breaking the first line of pressure, or to attract an opponent so as to pass the ball to another player to continue the build-up on the other side. 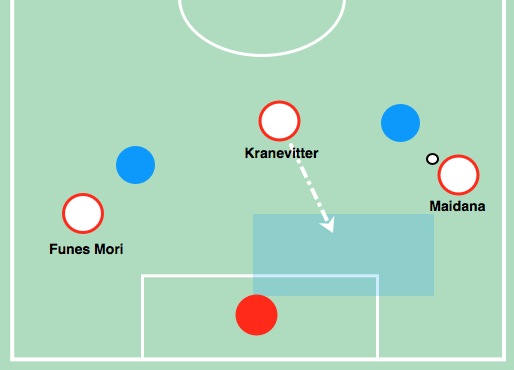 Kranevitter positions himself in optimal areas (sometimes as a full-back, sometimes between lines) depending on the the opponent´s type of pressing.

It is here where Matías Kranevitter has an outstanding understanding of the game. He sees like nobody else in the Argentine League where he must position himself so that he can receive the ball with enough distance from his opponent: sometimes he will occupy the fullback zone, sometimes he will situate between the opponent´s lines.

For this to be executed effectively, ball control is fundamental. And Kranevitter is a specialist on the matter. He usually controls the ball with the opposite foot from the side where the ball is coming, so that he can keep three options to take actions on (both sides and the center).

Unlike Julian Weigl (Borussia Dortmund´s 20-year-old center mid), Kranevitter occupies more the fullback zone and less between opponent´s lines when building up. However, with Milton Casco´s arrival and Rojas´ departure, it is very likely that he will do the latter more.

The following video clearly shows Kranevitter´s movements, their importance for a good buildup and for further combination play, and how his perfect ball control and orientation allows him to save tons of time.

Kranevitter in the “new” River Plate

With Ariel Rojas´ departure and Pisculichi´s return to the line-up (in substitution for Ponzio to eliminate the flat four-player midfield), very few players in River Plate can play as interiors to receive ball from the three-line back (neither Bertolo nor Sánchez, or even Pity Martínez, have a natural interior-specific type of orientation). Thus, in River Plate first game with this new formation (against Liga Universitaria de Quito, Copa Sudamericana), we saw Kranevitter positioning more between lines when playing the ball out from the back, with Alvarez Balanta occupying the fullback role and Milton Casco standing on the left back.

More games need to unfold to confirm this new trend, but Kranevitter´s role might be more to occupy the zone between opponent´s lines, taking advantage of his ball control and orientation to solve a “hidden” but fundamental problem: Even with very technical and skilled players for 1v1 situations, River Plate needs someone with a first-class orientation in order to reach the final third with many players in attacking positions. 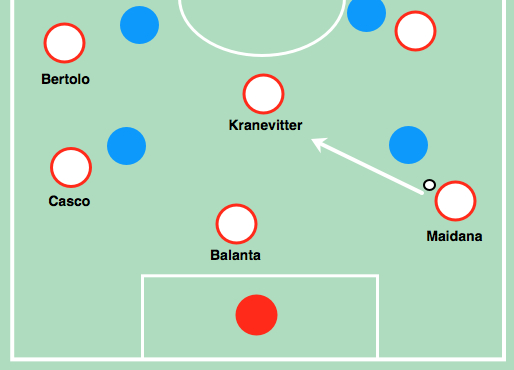 Kranevitter stands between lines, and it´s Casco who stays in the back. Kranevitter´s ball control and orientation allows River Plate to reach the final third with many players in attacking positions.

All posts by Julián Genoud
6